How IT Outlet Became The Nerds You Love To Know 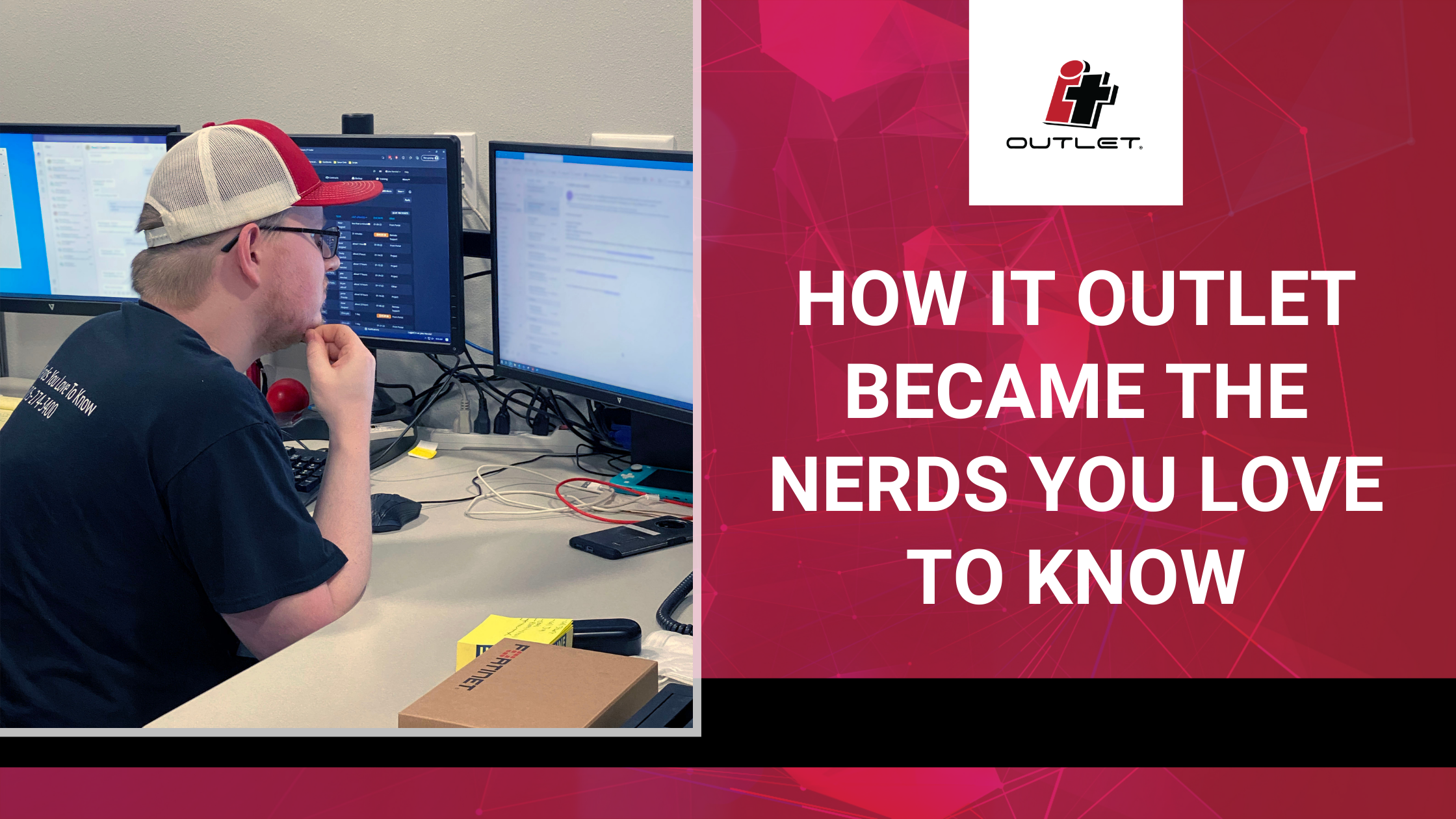 Someday we’ll read about IT Outlet in one of those nationally recognized business publications. The small team situated in a newly built headquarters north of Brandon, South Dakota, has already established an impressive reputation in the international information and technology market. Closer to home, if there is such a thing for a multi-million dollar company that serves clients across the U.S., IT Outlet continues to expand across its regional backyard. Serving a wide range of clients from big healthcare and education to every type of small business, the team has created a noteworthy blueprint to tech that combines an obsessive approach to in-house culture building, a customer-centric view to problem-solving, and an undeniable skill set for all things IT. Get to know the leadership team of Kevin Huber, CEO; Kris Robbins, Vice President; and Matt Geiver, Chief Operations Officer, and it's easy to envision the three posing for a cover shoot about building an IT empire while having fun doing it.

The Basics Of IT Outlet

Huber and Robbins, both Dakota State University graduates that grew up in Brandon, know their tech. On any given day they might talk with a client from Guam in need of refurbished servers or meet up with a southern Sioux Falls business looking for overall IT help. Robbins walks the office with a cordless headset most days, ready at all times to help his clients. A champion of customer service in a world focused on computers, wires and data, Robbins headset is clearly a staple of IT Outlet’s success. “I’ve learned that the business of IT is still dealing with people. I think a lot of others forget that,” he says. “People want to know that the reseller they’re working with has a shared interest in their business and environment, and that when inevitable issues arise, they’ll have someone they can rely on to get their issues resolved quickly.”

Robbins and the rest of the team have embraced a motto for dealing with customers that has paid off. To use their acronym, they C.A.R.E by “creating authentic relationships everyday.” Caring about their work as they do, has helped the company’s bottomline grow at an impressive rate for several years running. 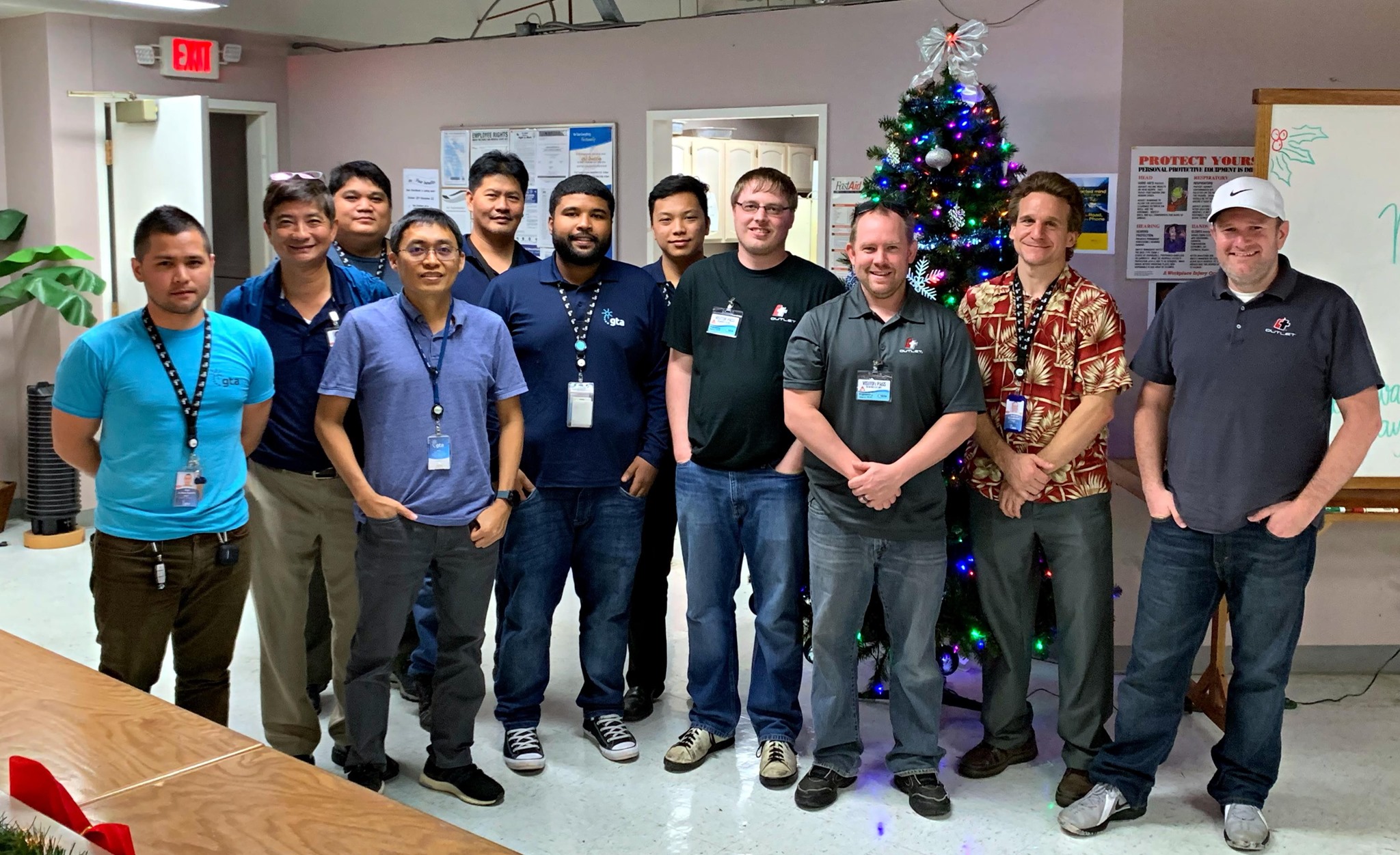 The IT Outlet team in Guam assistance with technology issues.

Dustin Sperlich, IT Director, leads IT Outlet’s specialized team of gurus that can do everything from installs to entire system upgrades. Sperlich is a major asset, according to everyone in the building, and like Robbins, he’s embraced the C.A.R.E approach. It’s easy to see why the small team is already considering expansion. Through a combination of in-person and virtual, the company provides managed services, augmented services and cyber threat assessments for the healthcare, government, education, finance, retail and small business sectors. For any of the sectors they serve, Sperlich and his team can provide or set-up physical security, data solutions, compute and virtualization options, network connectivity and wireless or even firewalls. Recently, Sperlich and crew have been expanding into the managed services sector in order to better serve more regional clients.

Sperlich utilizes a team-based approach to tech. “From the newest member of the team to the most experienced, I find it important to involve the team in decisions and solutions,” he says. “This involves making sure they have the resources to investigate, replicate or test a wide variety of technology while making sure they know the ‘why’ in each task.” Sperlich’s only hindrance today is that his team’s reputation for quality and efficiency has put them in massive demand.

For all of the company’s past and upcoming success, the present and future of IT Outlet is based with Huber and Geiver’s focus on in-house operations. Huber brings a no-nonsense, authenticity to the business--and life in general--that permeates throughout each floor of the building. If Huber believes in something, those he works with will know it, and one thing he is known for today is a positive company culture. “I make sure that everyone wins, employees and customers,” Huber says on his approach to culture building. A nationally-recognized, award-winning pitmaster behind the BBQ when he’s not helping to run IT Outlet, Huber is relentless in his passion for creating a fun, rewarding and successful work environment. Huber is the type of leader destined for those big-time magazine covers depicting leaders unafraid and unrelenting in their approach to getting things done the way they see fit.

The new headquarters has a work kitchen most chefs would be jealous of, and the point in having it, as you’ll understand after talking with Huber, is linked to the culture IT Outlet is becoming known for. Huber and Geiver are committed to creating a work environment where people are excited to be, where they excel. “If you lead anyone, which we all do, make sure you share the power,” Huber says, “Put your people’s needs first and help them perform at beyond their highest potential.” A seeingly simple, but important part of that, is building company culture through food. IT Outlet’s team never goes hungry.

Geiver is also a definite believer in building the culture of an IT company to maintain its growth trajectory well into the future. An experienced operations and people manager with ties to the financial industry, Geiver helped lead the transition of the company during the past few years. He most recently helped led the move from the previous location into the new digs. “We have designed multiple spaces within the building for expected growth,” Geiver explains, citing the addition of a tech room, server room and sales floor. All of it, he believes, adds to the comradery of the ever-growing IT Outlet team. “The new space has also allowed for us to put some new toys in and continue to bring our team together which provides a sense of pride and ownership in their jobs.” By toys, Geiver is referring to that fancy kitchen, a golf simulator and other amenities that bring a wow factor to the facility. IT people know how to have fun.

The Future Of IT (Outlet)

As entities of all sizes manage the daily challenges of modern technology, Robbins is excited by the position his team has gained in the industry. Cybersecurity will be at the forefront of all businesses in the coming years, an issue the team is well versed at dealing with. On the hardware side, Robbins is also watching the supply chain and manufacturing structure. The team has already found creative ways to get projects done. More things will go to the cloud in the form of virtual firewalls, storage and networking, he says, all of which is going to be big.

Sperlich and his team of techs all agree that the future is exciting in the world of tech. And, that they will be ready for anything that comes along. “Afterall,” Sperlich says, “we are a bit nerdy for this stuff.” Huber, Robbins and Geiver also share the IT Director’s excitement for what the tech world has to bring in the future. In fact, they’ve embraced it. If nerdy, as Sperlich puts it, equates to highly knowledgeable, passionate and devoted to specific service as it relates to things like firewalls, cyber, 5G or any other tech term you may or may not understand, then the entire team at IT Outlet is very nerdy. So, as the team itself will tell all of their current or future customers in nearly every industry imaginable, they are, “the nerds you love to know.”

The Truth Behind Sales: Ryan Alfson

I joined the IT Outlet initially out of necessity. While living in Kansas, I had just recently graduated with my Master's Degree and my wife and I were moving back to Sioux Falls [...]